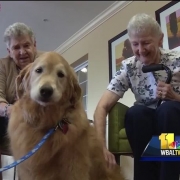 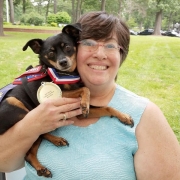 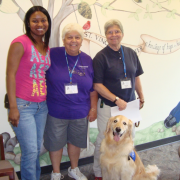 If you’ve been to a parade, you may have met Rusty. But you probably don’t know all of his story. As part of our celebration of 35 years of licking loneliness, we’ve invited our volunteers to share their stories with you. This is Rusty’s, courtesy of his “mom,” Cheryl Karpiak. You can follow Rusty on Facebook @RustyTheBrave.

Rusty, a bluetick coonhound mix, was a rescue from Kentucky. He was found almost dead on the side of the road from loss of blood, with several broken bones. He had an orange hunting collar with tags, but when they were contacted, they claimed it was a wrong number. He was obviously a “throw away.” His story was shared on Facebook and a local news station picked up his story. Money was raised to cover his expensive vet bills from several states.

My husband and I drove 10 hours to adopt him.

After he healed we started taking him for training at BFF Pet Services, recommended to us by our pet sitter, Dee Hart from Pawfessional Pet Services (also a trainer at BFF). After passing his basic obedience class, we tried a tracking class. When he didn’t seem interested in that, and his sweet temperament became more apparent, we decided to train him for dog therapy to make visits at our local Charlotte Hall Veterans Home, since my husband is also a veteran. He excelled at it! After completing the Canine Good Citizen prep class AND passing the test and becoming CGC titled, we completed Dog Therapy 101 class. We registered him with the AKC under PAL (Purebred Alternative Breeding). We tested and were accepted at Pets On Wheels. Rusty became BFF Pet Services FIRST hound dog to become a certified therapy dog.

He completed his first ten visits required by the AKC, and earned his Novice Therapy Dog title (THDN). We are working towards his next title, which is Therapy Dog (THD) after 50 visits.

Even though hound dogs are known to be stubborn and hard to train, Rusty seemed to be a special case. We were back at BFF Pet Services in a Trick Dog class. Rusty did fantastic! He earned his Novice Trick Dog title (NTD). He became only the SECOND bluetick coonhound in the country to get his NTD title.

After doing so well, with that, we continued to work with his trainer, and he tested and titled for Intermediate Trick Dog (ITD). Then he tested and also passed for Advanced Trick Dog (ATD). For these two titles, he is the ONLY bluetick coonhound in the country to have these titles.

We have plans to continue his Trick Dog training and reach the Expert Trick Dog level. This year he has been selected by BFF Pet Services to help demo tricks, along with a few other dogs, at the Maryland Dog Fest at the Charles County Fair Grounds.

I am so happy that after his ordeal in Kentucky, he is now the one giving comfort to those who need it.

It was a beautiful fall day for the First Annual Wheel to Heal event sponsored by the Hunt Valley Rotary on Oct. 29. Participants came with wagons, skateboards, bikes and strollers to tackle a 3-mile loop on the Torrey C. Brown NCR Trail and, according to the organizers, have a “rolling, rollicking good time” in support of Pets on Wheels, a nonprofit organization that brings therapy animals to facilities for friendly visits. Pets on Wheels has more than 480 volunteer teams and visits more than 300 facilities, including nursing homes, hospices, shelters, veteran’s hospitals, schools, libraries and more.

The day featured food, games and lots of fun and prizes with children and adults participating in multiple adventures, including a scavenger hunt, corn hole, balloon animals, duck pond, and more. Kids came in their Halloween costumes and did some trick-or-treating as well. Several of the therapy pets joined in the festivities, such as Mugsy, a petite bulldog and Otis, the Superdog, who was rescued by Tiffany Metzger. As a senior dog in a shelter, Otis had a rough life, but now is a super therapy pet bringing smiles to anyone he meets. The Rotarians and the event’s sponsors were pleased to support such a terrific cause and plan to make the Wheel to Heal event an annual one!

Laura Ehrlich, 94, smiled with delight when she saw Kelly walking past her chair in the North Oaks retirement community in Pikesville.

Bunny and Mike Roseman patted Kelly on the head and greeted her happily.

Kelly isn’t a grandchild of one of the residents, nor is she a resident, relative or employee. Kelly is a dog.

“When she comes to visit, it’s like a child coming to see you,” Ehrlich said. “She shows affection, she shows love. Just look at the way her tail goes back and forth, she’s so happy to see us. She’s so affectionate, it’s just lovely.”

Kelly is a therapy dog with the Maryland nonprofit Pets on Wheels. Since she qualified for the program four years ago, she and owner Steve Lesser have been visiting North Oaks weekly, among other locations, donating their time and love.

“It’s a service that’s not invasive, as far as medicine is concerned, but that has some real health benefits,” said Pawloski, who cited lowered blood pressure, decreased stress levels and improved emotional wellbeing as examples.

Four-legged guests joined more than 30 students from Oklahoma Road Middle School in the media center Thursday afternoon as the Pets on Wheels therapy dogs visited the school for an afternoon of fuzzy fellowship.

Pets on Wheels is a nonprofit devoted to bringing therapy animals to schools, libraries, hospitals and other places where people can engage with them. Carolyn Cherry, media specialist at Oklahoma Road and a former Pets of Wheels dog owner, said the program is a wonderful way to help children come out of their shells in a friendly atmosphere. She said animals can often be a great de-stressor for students during tough times. Read more : http://www.carrollcountytimes.com/news/education/ph-cc-oklahoma-therapy-dogs-20160225-story.html.