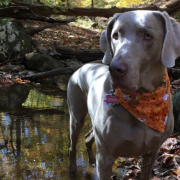 If you’ve been to a parade, you may have met Rusty. But you probably don’t know all of his story. As part of our celebration of 35 years of licking loneliness, we’ve invited our volunteers to share their stories with you. This is Rusty’s, courtesy of his “mom,” Cheryl Karpiak. You can follow Rusty on Facebook @RustyTheBrave.

Rusty, a bluetick coonhound mix, was a rescue from Kentucky. He was found almost dead on the side of the road from loss of blood, with several broken bones. He had an orange hunting collar with tags, but when they were contacted, they claimed it was a wrong number. He was obviously a “throw away.” His story was shared on Facebook and a local news station picked up his story. Money was raised to cover his expensive vet bills from several states.

My husband and I drove 10 hours to adopt him.

After he healed we started taking him for training at BFF Pet Services, recommended to us by our pet sitter, Dee Hart from Pawfessional Pet Services (also a trainer at BFF). After passing his basic obedience class, we tried a tracking class. When he didn’t seem interested in that, and his sweet temperament became more apparent, we decided to train him for dog therapy to make visits at our local Charlotte Hall Veterans Home, since my husband is also a veteran. He excelled at it! After completing the Canine Good Citizen prep class AND passing the test and becoming CGC titled, we completed Dog Therapy 101 class. We registered him with the AKC under PAL (Purebred Alternative Breeding). We tested and were accepted at Pets On Wheels. Rusty became BFF Pet Services FIRST hound dog to become a certified therapy dog.

He completed his first ten visits required by the AKC, and earned his Novice Therapy Dog title (THDN). We are working towards his next title, which is Therapy Dog (THD) after 50 visits.

Even though hound dogs are known to be stubborn and hard to train, Rusty seemed to be a special case. We were back at BFF Pet Services in a Trick Dog class. Rusty did fantastic! He earned his Novice Trick Dog title (NTD). He became only the SECOND bluetick coonhound in the country to get his NTD title.

After doing so well, with that, we continued to work with his trainer, and he tested and titled for Intermediate Trick Dog (ITD). Then he tested and also passed for Advanced Trick Dog (ATD). For these two titles, he is the ONLY bluetick coonhound in the country to have these titles.

We have plans to continue his Trick Dog training and reach the Expert Trick Dog level. This year he has been selected by BFF Pet Services to help demo tricks, along with a few other dogs, at the Maryland Dog Fest at the Charles County Fair Grounds.

I am so happy that after his ordeal in Kentucky, he is now the one giving comfort to those who need it.